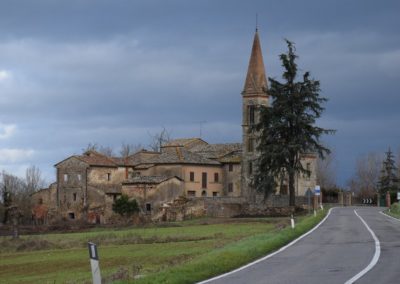 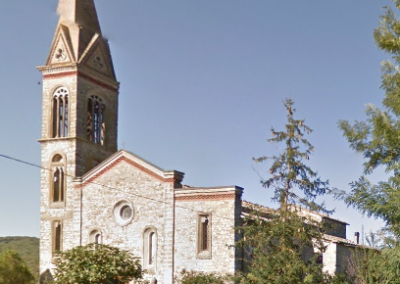 The parish church of San Quirico is already attested in some documents of the 11th century, even if the construction of the building has probably occurred earlier. The church currently has a west-east orientation with a single nave, with façade and bell tower built in the first half of the 20th century in Neo-Gothic style, in a radical construction that completely altered the Romanesque appearance of the building. The Romanesque Pieve had an opposite orientation compared to the current one with a single façade, still well preserved in the current external presbytery area, characterized by four sloping and central mullioned windows. The medieval implant of the structure had three naves: in fact, in today’s sacristy, corresponding to the ancient right nave, it is possible to see two round-arched brick arches that can be interpreted as dividing crossings with the central nave.