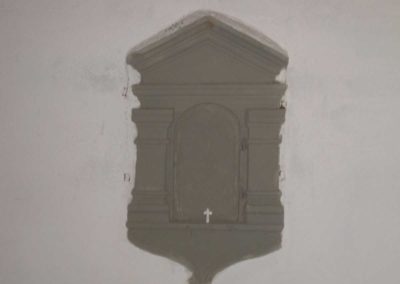 According to some oral sources on the hill to the south-west of the current town of Rapale called San Miniato (Poggio Castellare) in the past, during the agricultural work the peasants often came across the remains of buildings made of bricks and stone. The presence of an archaic period site near the current cemetery of Rapale could be confirmed by the discovery in surface of Etruscan and roman material.
In the area of the cemetery, more precisely near the current chapel, in the 19th century is still attested the presence of a church dedicated to San Miniato. No traces remain of the building of worship, except for a stone walled ciborium inside the current chapel. The church of San Miniato is attested in the middle ages, but we do not know precisely the period of foundation. Already in the second half of the 16th the structure, from the reading of 1468’s pastoral visit, appeared without hosts, in a wretched conservative state and mass was no longer celebrated, in fact the sacred ceremonies were carried out in the church located inside the castle of Rapale.