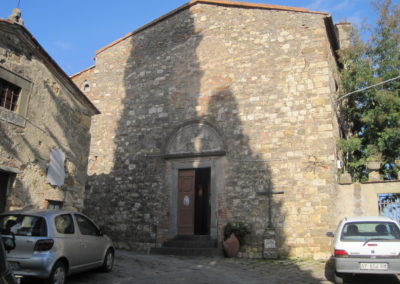 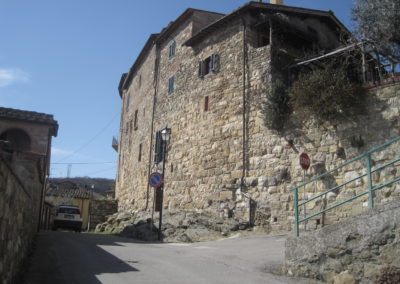 The town of San Leolino is located at an altitude of 377 meters above sea level, in a territory characterized by olive groves and vineyards. The center, nestled on the ridge of the hill, presents an elongated shape composed by the original nucleus of the medieval castle and the relative village developed in the following centuries. Even today the remains of the ancient castrum are clearly visible, including the characteristic elliptical shape that can be found in other Valdambra castles, such as those of Rapale and Montebenichi. Even in the 18th century the access door to the castle was preserved, destroyed only in 1777 as it was in a very poor state of conservation.
The historical information does not allow to establish with certainty the period of construction of the primitive castle. The first known document is from the end of the 13th century, but is clear that the castrum was built earlier, in the period in which much of Tuscany was subject to the phenomenon of fortification called “incastellamento”. San Leolino has inevitably followed the fate of Valdambra, a land contended for centuries by Arezzo, Siena and Florence. In the second half of the 13th century the Valley of Ambra is part of the count’s Guidi of Modigliana possessions and for almost two centuries it is involved in the battles between the Guelphs and the Ghibellines. In 1307 the castle was ransacked and burned by Messer Guido of Arduino da Viana who at the head of three hundred knights and two thousand soldiers came from Lunigiana, sent by the Sienese to the aid of the Florentines, allies at that moment, threatened by the troops of the legate of Pope Clemente V. In 1431 the count Bernardino della Carda degli Ubaldini, left the Florenties and allied with the Duke of Milan, descended with his troops to Valdambra and on the 1st may occupied San Leolino.
In the 16th century also the Valdambra with all its castles became part of the Grand Duchy of Tuscany.
Today it is possible to notice a large part of the layout of the castle walls built with large lithic elements in rough-hewn limestone set on fairly regular courses. Entering in the heart of the town you will notice an ancient farmhouse characterized by an entrance with three arches and a loggia with four arches that introduces the access to the suggestive Piazza della Fonte; from here, through a slight ramp, leads to the village church dedicated to San Leolino. The structure, with a beautiful example of a bell gable, has various building phases on the outside and is the result of heavy alterations that have altered its original appearance. The building has a gabled roof higher than the original roof and an entrance door surmounted by an arch at full center. The church on one side is set directly on the ancient castle walls. Internally the church hall is characterized by a single rectangular nave with a wooden trussed roof. In the counter-façade is situated the “cantor”, supported by arches in the center sustained by columns, where the Orgnano is located. The main altar is surmounted by a canvas depicting the Virgin Mary with the Child and three kneeling saints attributable to a 17th century painter from Arezzo.