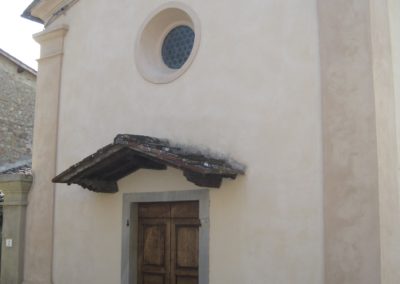 The demic center of Pogi is located near Bucine in a small hill bordered by the Ambra torrent whose access is guaranteed by a medieval bridge over the stream, which rests on pillars of a previous structure of Roman origin. The castle of Pogi is documented from the thirteenth century and it is certain that until 1261 it belonged to the heirs of Alberico and Alberto di Pogi. In the second half of the thirteenth century the castle was given to the Municipality of Arezzo, but it always remained the property of the Guidi counts until at least 1331, while in 1336 it submitted to the Florentine Republic. From the reading of the documentary sources it is possible to obtain information on the organization of the castle between the thirteenth and fourteenth centuries. The fortified center had a mighty building circuit made of lithium materials of medium and large size simply roughed and placed on horizontal courses. Traces of this wall circuit remain above all on the eastern part of the hill for a stretch of 13 meters for a height of about 4 meters. The sources also indicate the presence within the castle of two towers and a palace, the mansion of the lord, located between them. The castle had two access gates, one of which contains faint traces in the urban fabric of the southern sector. Inside the building circuit there was also a church dedicated to San Lorenzo, which later became San Donato following the transfer inside the castle of the dedication of the church of San Donato a Scei, which took place with great probability during the fifteenth century.

Church of San Donato in Pogi

Church of San Giovannino in Pogi

Remains of medieval walls in Pogi