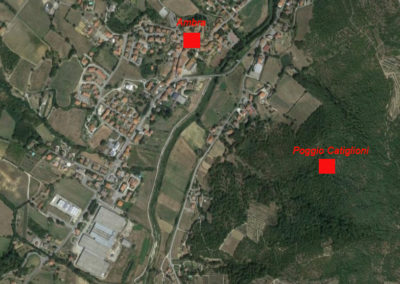 The site was the subject of a systematic archaeological investigation by the Archaeological Superintendence of Tuscany. Poggio Castiglioni has a height of about 429 meters above the sea level and the settlement develops on a partly artificial plateau supported by a monumental wall about 2.40 meters of thickness, with a masonry consisting in assembled dry flat stones, and sack composed of medium and large pieces of stone. Inside the terraced area, wall structures referring to the houses have been recovered. In the western portion of the plateau the remains of a building about 25 meters long have been brought to light divided into various rooms; an additional building perpendicular to the other was highlighted in the 2003 excavation campaign and his constructive features are similar to the first, and the latter is also divided into various environments. This building obliterated levels with structures attributable to a previous settlement phase. In the site of Poggio Castiglioni, 5 settlement phases have been identified between the last decades of the 7th century and the second half of the 6th century B.C.