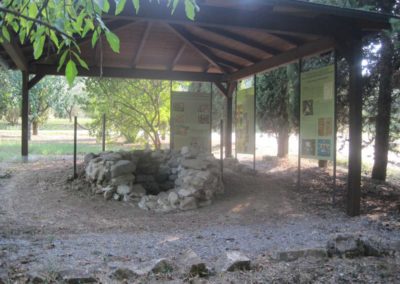 In the whole area of Monteleoni and Castel Vecchio is present a dispersion of clay fragments of various periods, both on the hillside at east of the church and on the top of the hill itself. From 1993 until 1995 some systematic researches were carried out in the area to be able to understand the dynamics of the ancient settlement, profoundly altered by the quarrying activities. The results showed the presence in the area of a settlement reality datable between the middle of the 1st century B.C. and the 1st century A.C. They have been found numerous artifacts of hydraulic nature, elements attributable to wall structures and abundant remains of coverings referable to dwellings. Regarding the materials, they have been recovered numerous fragments of earthenware containers (dolia), kitchen and canteen crockery and loom weights. All these elements seem to indicate a rural settlement reality with an housing and agricultural function. In addition, numerous wells have been brought to light, which are made with stone materials of fluvial origin and, moreover, traces of system for the collection and conservation of the water functional to the survival of the community and the irrigation of cultivated fields. On the bottom of the wells they have been recovered numerous amphorae fragments, almost all of which can be entirely reassembled, and two metal receptacle that could indicate the drawing and transport of water for domestic use.