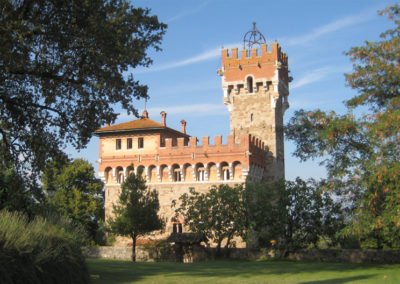 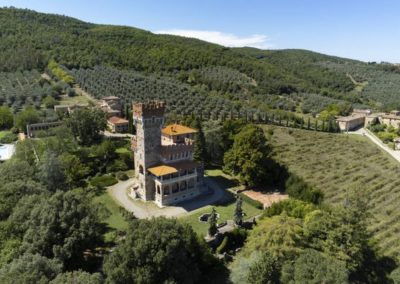 The area of Lupinari is closely related to the figure of the Italian politician Edoardo Frisoni, born in 1871 in Brazil, although the Italian parliamentary yearbooks give him native of the city of Genova. The wealthy businessman settled in the Municipality of Bucine where he became the owner of the huge Lupinari farm. In 1906 he had a new villa built on his farm through the project of the Florentine architect Gino Coppedè (Florence 1866 – Rome 1927). The villa, locally known as Castle of Lupinari, is a beautiful example of tuscan Neo-Gothic architecture. The building has the architectural forms of a real medieval castle and has some characters reminiscent of the Arnolfian ones of Palazzo della Signoria in Florence. The castle is composed of a massive central body in strong stone, a typical element of medieval Florentine architecture, on which there are mullioned windows with strong vertical thrust. The body of the building is crowned with corbels that support the embattled band jutting out from the edge of the perimeter walls. The high stone tower merges with the main nucleus and consists of a brick top part with battlements supported by stone corbels. The structure is currently a private residence.