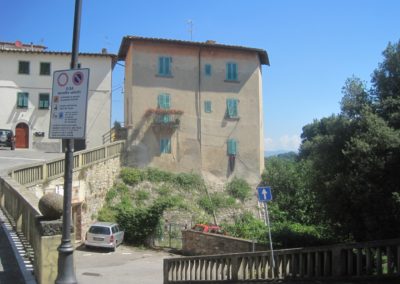 In a document of 1072 Bucine is defined as a “vocabulo”. This term could mean that in the XI century the centre of Bucine was a simple hamlet; it was defined as a “castle” only in 1208 by count Guido Guerra IV. The building of the castle is strictly connected to the rise to power of the Conti Guidi family, who ruled the city until at least the end of the XIII century. In 1323 the bishop of Arezzo, Guido Tarlati, assaulted the castle but his family only held the power for twenty years because their leadership caused the population’s discontent, and in 1335 Bucine was subdued to Florence. At the end of the XIV century, the replic organized a new administration body called “Community of Valdambra” which later became the “League of Valdambra”. The castle of Bucine thus became the centre of the so-called “Podesteria del Bucine”.

Church of Saint Apollinare and Ercolano