The castle of Cennina is situated on a hill about 477 meters above sea level, on the ridge that from Monte di Rota down toward Capannole this castle dominates most of the Valdambra and Valdarno. The toponym of the locality could derive from the noble Etruscan name “Accenina” or from the roman one “Accennanu”: therefore the name would seem to indicate the presence in the place of an ancient settlement prior to the foundation of the castle. The presence of an Etruscan-roman settlement would seem to be confirmed by the superficial discovery, close to the defensive structures of the castle, of fragments of black-painted pottery, very generally datable to the Hellenistic period. During some restoration work on the walls, some fragments of cinerary urns in travertine, probably Etruscan, were found. According to some erudite historians, the fortified center was founded in the second half of the 12th century in a strategically important point for the defense of the territory. The castle became part of the Viscontado della Valdambra occupied by each other the Tarlati, Ubertini and Conti Guidi families. In the published sources we have reports of Cennina during the second half of the 13th century when the episcopate of Arezzo intervened for a restructuring of the defensive castle structures; in addition, in the same period we keep in mind the presence of the church of San Pietro de Cenina. The remains that are visible today are mostly datable to the full 13th realized through a construction technique that requires an important investment by the commissioning both for the initial quarrying phase and for the final construction phase. Currently, of the castle are left large portions of the wall circuit, the building, the access tower and some parts of the houses and, in addition, the water supply tank. The settlement had a polygonal plant entirely surrounded by mighty walls made of ashlar blocks. From the information in our possession it would seem that the castle had only two doors: one on the south side with its tower, while to the north is still visible a postern.
The building has a rectangular shape and a vertical expansion articulated on two floors above ground. The building on the eastern side was equipped with a quadrangular tower still visible in the 19th century. The building in the upper part is characterized by a large openings surmounted by a full-center arches made of sandstone ashlars, while the rest of the structure is constructed through the use of perfectly rough-hewn stone elements set on horizontal courses. The houses of the castle set along the walls of the northern sector and they are still present today, even if currently they show later architectural features, probably datable to the 15th century. The water conservation tank is positioned between the houses and the mansion. Inside the castle there also had to be a church, as evidenced by a document dated 1336, which states that the meeting of the Cennina community takes place in ecclesia Sancti Petri sita in castro dicte Cennine. In an unspecified period the church of San Pietro was transferred to the village formed below the eastern walls: in fact in the plants of the Guelfi captains, the religious building is represented not inside the castle walls, but in the village below. This location remained unchanged until the 19th century, as the Lorraine land register shows. There are no traces of the church of San Pietro, either in the castle or in the village; the current religious building was, in fact, built in the 20th century. 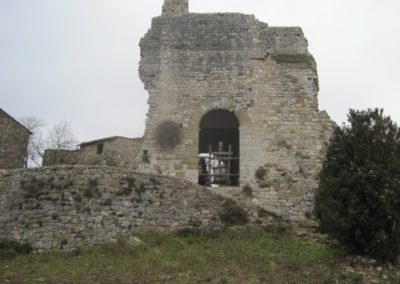 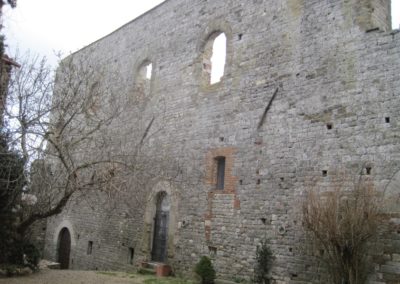